Ifremer was responsible for designing and developing “working models” that were tested at sea in 2012 and 2013. After further work to extend their operational depth to 4000m, these models went into production with NKE in early 2014 resulting in two prototypes which were deployed in May 2014 during the Geovide campaign. The first one has a 10 day cycle. It is being tested in the Iberian basin to allow us to verify the stability of the float during drift phases and the accuracy of measurements (32 cycles at 4000m were completed in 2014). The second cycles every two days in order to check the float’s cycle capacity and to assess energy consumption (90 cycles at 4000m were completed in 2014) (figure 1). To date there has been good reproducibility in the float’s behavior and energy consumption levels are very satisfactory.

Following negotiations conducted by Ifremer, NKE has now been awarded a license to manufacture and commercialize the floats.

A contract for 12 Deep Arvor floats was drawn up in October for WP5. 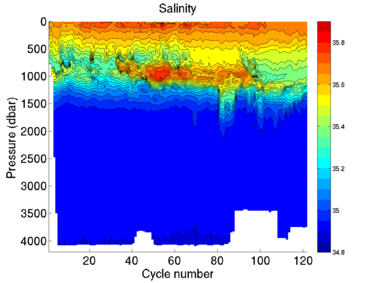